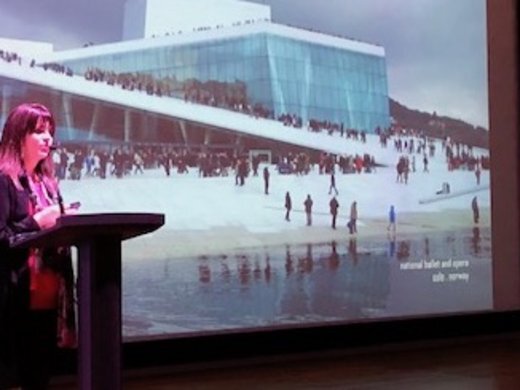 Snøhetta is based in Oslo, Norway, with offices in various cities including New York, Paris and Stockholm. Among its numerous designs are the Alexandria Library in Egypt and the National September 11 Memorial Museum Pavilion in New York.

“We are thrilled to be working with Snøhetta, and their exciting concept was the unanimous choice of the public vote, our architectural panel and the board of directors of the El Paso Children’s Museum,” Dr. Kortenaar said of the three-pronged international effort to find a designer. “We recognize that the concept Snøhetta produced best embodied the innovation and cooperation that the El Paso Children’s Museum hopes to inspire.”

The El Paso Children’s Museum design will support the museum’s mission to celebrate the city’s multi-cultural community and create an enriching environment for collaboration, STEAM education cooperation, and critical thinking. The museum was approved by voters in the 2012 Quality of Life bond election. Since 2016, the El Paso Community Foundation has provided leadership on the public-private partnership formed to build the museum, which includes the City of El Paso and the City of El Paso’s Museums and Cultural Affairs Department.

The museum will be built on vacant land at 201 W. Main, just north of the art museum. It is expected to open by early 2021.

Go to epcmuseum.org for more information.