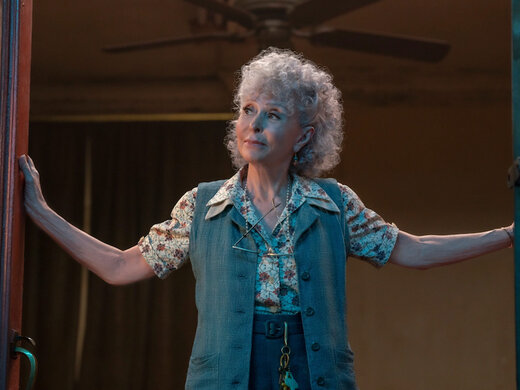 Ms. Moreno is the last surviving member of the main cast of Singin’ in the Rain. She played Zelda Zanders, her first Anglo character in a feature film, in Gene Kelly and Stanley Donen’s classic. She won a supporting actress Academy Award for her portrayal of the fiery Anita in 1961’s of West Side Story. In the new version, she served as an executive producer, played the newly created character of Valentina, and performed the pivotal song “Somewhere.”

Miss Moreno, 90, headlined a benefit concert at the Plaza Theatre in 1986, which enabled the El Paso Community Foundation to purchase the deteriorating 1930 movie palace and eventually restore it with the City of El Paso. She appeared again in 2007, the year after the theater reopened, and headlined the Plaza Classic in 2013.

Since then, she starred in the Latinx remake of TV’s One Day at a Time, received considerable Oscar buzz for the new West Side Story and has roles in the forthcoming Fast and Furious sequel, Fast X, and Tom Brady’s Eighty for Brady.

She is one of the few performers to receive TV’s Emmy, music’s Grammy, cinema’s Oscar, and Broadway’s Tony awards.

Miss Moreno joins the previously announced F. Murray Abraham, the El Paso native, as this year’s special guests. Mr. Abraham will appear with Amadeus, for which he won Best Actor Oscar, at 7 p.m. Friday, August 5 and The Grand Budapest Hotel at 4 p.m. Saturday, August 6, both in the Plaza Theatre.

Individual tickets for the 15th annual Plaza Classic Film Festival will go on sale on June 27 at the Plaza Theatre box office and Ticketmaster.com. Festival Passes, which include admission to Plaza Classic movies and special events, and the new Movies Only Pass, are on sale at plazaclassic.com/tickets. Go to plazaclassic.com for more information or follow us on social media.