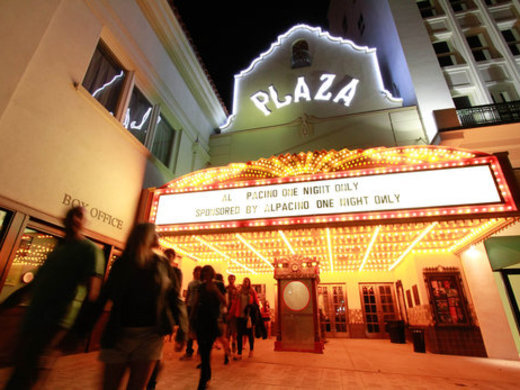 Now entering its 6th year, the Plaza Classic Film Festival celebrates our rich cinema history in our very own historic movie house. Built during the Great Depression (at a cost of $1 million and originally opened on September 12, 1930) the newly restored Plaza Theatre boasts a unique atmospheric style that makes it feel as if you are sitting in the courtyard of a Spanish hacienda.

Who can resist the pull of classic cinema with the like of Jaws, The Godfather and The Birds? The Plaza Classic Film Festival is not just known for the more than 80 films that are shown each year, it also gets some of the best of the industry’s insiders. Special guests have included: production manager, C.O. Doc Erickson; film historian and journalist, Nick Clooney; director, actor and writer Peter Bogdanovich; and actors, Michael York, Debbie Reynolds, Tippi Hedren and Al Pacino.