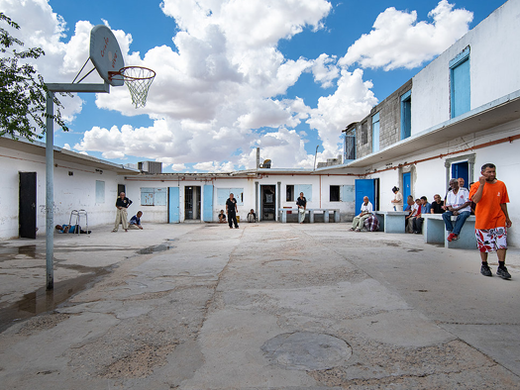 Though it lies miles beyond the edge of Ciudad Juárez and its residents are often overlooked by society, the Vision in Action Mental Health Sanctuary is front and center in Mentes Hermosas (Beautiful Minds), a new photography series and exhibit captured by Art Moreno Jr.

Established by Pastor Jose Antonio Galvan in 1995, the Vision in Action Mental Health Sanctuary provides care for individuals who were living on the streets of Juárez and primarily serves those grappling with mental illness. On average, the Sanctuary serves about 100 people a month, providing a range of care that can include shelter, food, clothes, and treatment. Pastor Galvan describes the work as “dignifying the lives of those who have nothing” and frequently shares unfiltered glimpses into the Sanctuary’s work via social media. The images and video are a part of the ethos of storytelling that surrounds the Sanctuary, one that seeks to understand and acknowledge each resident as an individual.

Hoping to further the reach and knowledge of its work, Sanctuary leadership recently collaborated with photographer Art Moreno Jr. to produce a series of portraits of Sanctuary residents, one of which is being sold as a print through the El Paso Community Foundation. Proceeds support the Sanctuary’s efforts. The print being sold features Pastor Galvan, his face turned away, and his hand resting on the head of Ambrosio, a resident at the sanctuary, as he fixes Ambrosio’s collar for the photograph.

“When my assistant and I first arrived at Vision in Action with our mobile portrait studio in tow, I did not know who Pastor Galvan would have in place to photograph,” Moreno says of the Mentes Hermosas portraiture series. “As it turns out, the sanctuary’s entire population was lined up to stand before my lens!”

Moreno quickly realized the project was much bigger than he initially imagined. After photographing the hundred or so residents, he spent the next year painstakingly editing the images. As he pored over the portraits, Moreno realized something was missing.

“An image alone was simply not enough to visually articulate the beauty of another human being,” Moreno reflects. “I knew each subject had their story to tell.”

With the help of Pastor Galvan and one of his assistants by the name of Josue, Moreno’s portraiture series transformed into a more comprehensive profile of the Vision in Action Mental Health Sanctuary. Pastor Galvan and his staff worked to record the stories of those photographed and simultaneously distributed digital cameras to the residents for them to capture their lives and experiences at the Sanctuary through their own eyes. The photographs, portraits, and narratives were then combined on large acrylic displays, several of which are currently on view at the El Paso Community Foundation.

“A viewer will be able to have greater insight into the humanness of the portrait in front of them,” Moreno says of the final product.

Looking to the future, Moreno hopes the exhibit of displays will travel internationally, raising awareness and funds for the Sanctuary. Currently, a hardcover coffee table book of Mentes Hermosas is in the works, a compressive collection of the portraits, their stories, the Sanctuary’s history, and the photos taken by the patients.

“As a photographer, I have never embarked on such a fascinating endeavor with respect to a fundraising photo exhibit. I never envisioned myself showcasing my talent in such a manner,” Moreno adds. “My hope is that this exhibit gives the viewer a greater appreciation of the frailty of one’s beautiful mind and that they would leave the exhibit encouraged, and with a sense that but for the grace of God, there go I.”

To donate to the Vision in Action Mental Health Sanctuary or to purchase a Mentes Hermosas print, click here.

To learn more about the Vision in Action Mental Health Sanctuary, click here.