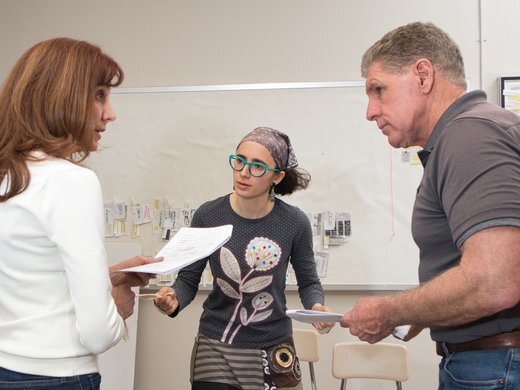 Writer-director Ali Dipp returns to the Philanthropy Theatre with a new play, Texas Triptych</b>, which taps her hometown’s history and geography to ask some big questions.

The Youth Collaboration of the Arts performs her new play at 2:30 p.m. Sunday, April 14, part of the El Paso Community Foundation Jewel Box Series at the Philanthropy Theatre, which is on the second floor of the Plaza Theatre Performing Arts Centre.

Tickets are $16 at the Plaza Theatre box office and ticketmaster.com (service charges apply).

El Paso’s Ali Dipp (pictured), 21, is in the dual degree program at Brown University and the Rhode Island School of Design. She formed the Youth Collaboration of the Arts while in high school. The group has staged four previous productions, including two in the Jewel Box Series.

Ali wrote — and directs — Texas Triptych, which weaves a dialogue between the Chamizal treaty of 1963 and the Texas oil bust of the 1980s. “The performance connects fragments of memory to create a history across houses, rooms, people, and times,” Ali says. “Through the currents of language, with its bounds and boundlessness, the play asks: How does our ebbing Río Grande speak?”

Ali is a triple threat on Texas Triptych. She also is part of its 10-member, multi-generational cast.

PROGRAMMING CHANGE: Due to a scheduling issue, the previously announced, season-closing production of Eclipse has been canceled. In its place, the mother-daughter duo Snake Charmer and the Belly Dancer will present an all-new show, Melusine</b>, at 2:30 p.m. Sunday, May 12 in the Philanthropy Theatre. Tickets are $16 at the Plaza Theatre box office and ticketmaster.com.

The Jewel Box Series was created by the El Paso Community Foundation to showcase local performing arts groups in the charming Philanthropy Theatre. The series presents diverse, unusual and inventive programs. It is produced in partnership with El Paso Live. The 191-seat Philanthropy Theatre is located above the Plaza Theatre box office on the second floor of the Plaza Theatre Performing Arts Centre annex.