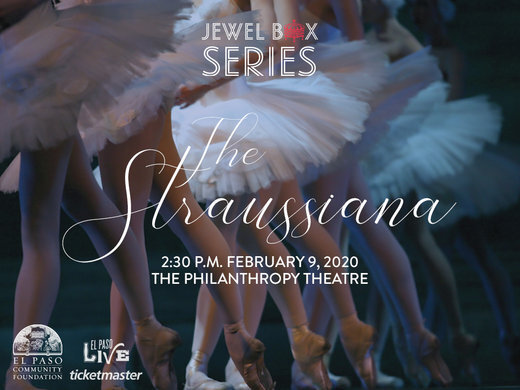 The music and dance of old Vienna come to life in The Straussiana</i>, the next production in the El Paso Community Foundation Jewel Box Series at the Philanthropy Theatre.

The Straussiana will be performed at 2:30 p.m. Sunday, February 9 in the Philanthropy Theatre, which is on the second floor of the Plaza Theatre Performing Arts Center Annex, above the box office.

The Straussiana is the first ballet in the Jewel Box Series, now in its sixth season.

It is a one-act ballet centered around a young male cadet who dances with several young women to the lively waltzes, polkas, gallops, marches and mazurkas of composer Johann Strauss and his sons, Johann Strauss II and Josef Strauss. The 13-member cast ranges in age from 3 to 29 years.

The production was created and directed by Rebecca Meza, founder and owner of El Paso’s Ballet in Session Academy. Ballet in Session specializes in the Vaganova method, traditional Russian classical ballet instruction based on the teachings of Marius Petipa. The studio has staged productions at the Chamizal National Memorial Theater, Loretto Academy and Bel Air High School.

Meza said the Jewel Box Series performance “gives my students an opportunity to learn and perform on a professional stage in a professional setting so that they may advance in their performance training and grow in the logistics of working on the stage and moving on to bigger and better things.”