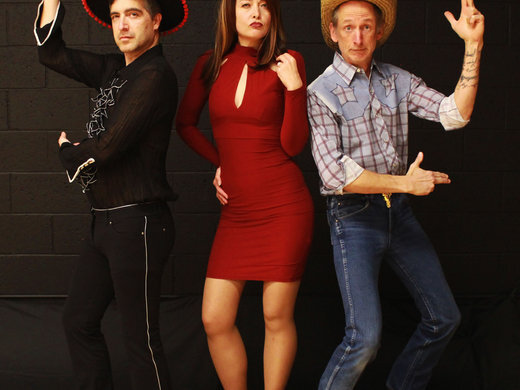 In “Five Course Love,” director Megan McQueen joins Algernon D’Ammassa and Brandon Brown to play 15 characters in search of true love in five different musical and physical settings — a BBQ joint, a mob hangout, a German restaurant, a Mexican cantina and a diner. “It’s kind of like five musicals for the price of one, because each has such a different, spot-on musical style,” McQueen said. “It’s sure to get the toes tapping and heart singing.”

Scaffolding Theatre Company, an affiliate of New Mexico State University theater department, performed two sold-out shows of its adaptation of “Disney’s Beauty and the Beast” in last season’s Jewel Box Series. The Jewel Box Series is produced in partnership with El Paso Live, and is supported by the City of El Paso’s Museums and Cultural Affairs Department.

• “Amor” — The El Paso Society for Musicians of the Future offers another of its thematic programs, just in time for Valentine’s Day. Mezzo-soprano Cherry Duke, guitarist George Salas and violinist Sandra Rivera perform songs and music about love and romance.
2:30 p.m. Sunday, February 11

• “Nouveau Chamber” — Saxophonist Daniel Rivera and a seven-piece string ensemble will perform his original chamber works. The pieces are influenced by classical, Latin and film music, and explore travel and human history.
2:30 p.m. Sunday, May 20