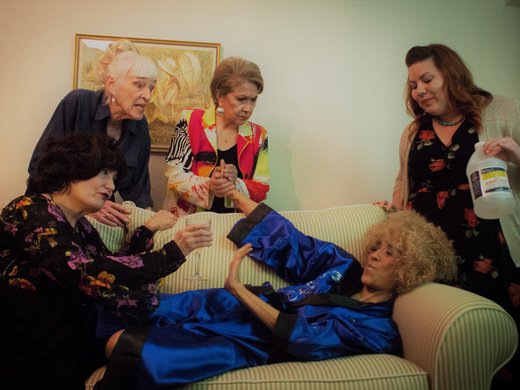 The El Paso Community Foundation Jewel Box Series at the Philanthropy Theatre will close out its 2016-2017 season with a bang.

Ted Karber, Jr.’s “Banging the Bell: A Texas Comedy in Two Acts,” that is.

Karber’s EPStageBusiness will perform the new comedy at 7 p.m. Saturday, May 20 and 2:30 p.m. Sunday, May 21 in the Philanthropy Theatre, which is on the second floor of the Plaza Theatre Performing Arts Center (above the box office). Sign Language Interpretation will be offered for Sunday’s performance.

The comedy, first staged last December at the Eclipse Theatre in Columbus, Ohio, centers around a group of women in a small Texas town. They conspire to be the belles at the proverbial ball (well, a cotillion), but a corpulent corpse and a dim-witted sheriff just might get in the way.

El Pasoan Karber, whose comedy “Precious Heart” closed last year’s Jewel Box Series, is directing the production, which features a nine-member cast headed by Amanda Vasquez as Opal Marie, in which whose home much of the action transpires. Vasquez co-starred in last December’s Jewel Box presentation of “A Barrio Christmas.”

“Banging the Bell” concludes the Jewel Box Series’ third season. Submissions for the 2017-2018 season will be considered beginning in June, with a season announcement due in August after the Foundation’s 10th annual Plaza Classic Film Festival, which runs Aug. 3-13.