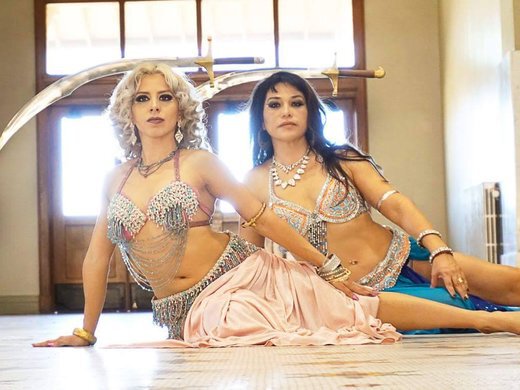 The fifth season of the El Paso Community Foundation Jewel Box Series at the Philanthropy Theatre will conclude with its first belly dance show.

The mother-daughter duo of Snake Charmer and the Belly Dancer presents Melusine</i> at 2:30 p.m. Sunday, May 12 in the Philanthropy Theatre, which is on the second floor of the Plaza Theatre Performing Arts Centre.

Tickets are $16 at the Plaza Theatre box office and ticketmaster.com (service charges apply).

Melusine is a conceptual piece inspired by the mythic, mermaid-like figure of European folklore. The all-new show features choreographic interpretations of muses, water nymphs, a harpy and Melusine’s mother and sisters. Melusine features 16 dancers (but no snakes!) from El Paso, Las Cruces, Alamogordo, Roswell and Anthony, N.M., and a dozen original dances in styles ranging from classic Egyptian to tribal fusion.

El Paso has a long history with belly dance. Snake Charmer (daughter Senee Barraza) and the Belly Dancer (mother Sonia Flores) have been performing together locally and internationally for 18 years. They produce the annual shows Arabesque and Cat’s Meow, teach classes at their Snake Charmer Studios and conduct workshops. Go to snakecharmerandthebellydancer.com to learn more.

The Jewel Box Series was created by the El Paso Community Foundation to showcase local performing arts groups in the charming Philanthropy Theatre. The series presents diverse, unusual and inventive programs. It is produced in partnership with El Paso Live. The 191-seat Philanthropy Theatre is located above the Plaza Theatre box office on the second floor of the Plaza Theatre Performing Arts Centre annex.

Submissions for the 2019-2020 season will be accepted beginning Monday, May 13 at epcf.org/jewelbox.