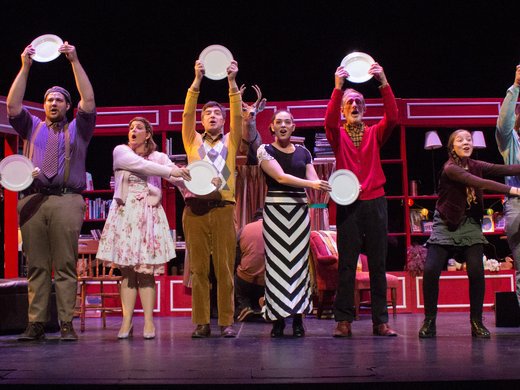 Be our guest as the Scaffolding Theatre Company of Las Cruces brings its imaginative take on “Disney’s Beauty and the Beast” to the El Paso Community Foundation Jewel Box Series at the Philanthropy Theatre.

Performances will be at 7 p.m. Saturday, February 11 and 2:30 p.m. Sunday, February 12 in the Philanthropy Theatre on the second floor of the Plaza Annex in the Plaza Theatre Performing Arts Centre.

Tickets are $16 at the box office, Ticketmaster outlets, ticketmaster.com (additional online charges may apply), and 800-745-3000.

In this refreshing revision of the 1991 Disney animated blockbuster, three generations of a family gather in their grandparents’ cluttered home and act out the story of the beautiful Belle and the Beast who falls in love with her. It includes most of the characters and songs — written by Alan Menken, Howard Ashman and Tim Rice, with a book by Linda Woolverton — audiences know and love, including “Be Our Guest” and “Beauty and the Beast.”