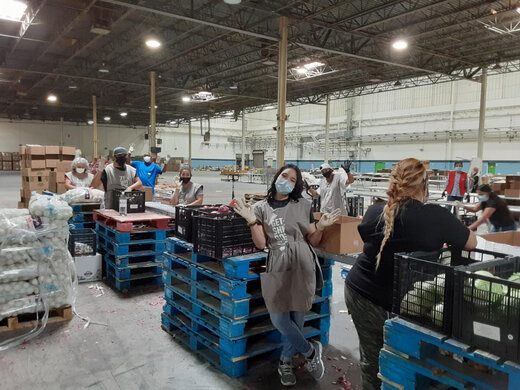 It was a little more than a year ago that the El Paso Community Foundation joined with the Get Shift Done initiative of northern Dallas to create Get Shift Done for El Paso.

Begun April 4, 2020, the donor-supported Get Shift Done for El Paso is still going strong. It has paid out more than $1.1 million in wages to more than 720 restaurant and hospitality workers laid off from their jobs due to the COVID-19 pandemic.

They have worked more than 102,000 hours at 15 different locations. Most of that work has taken place at the El Pasoans Fighting Hunger Food Bank and its satellite locations, but GSDEP workers also have helped the Desert Spoon Food Hub.

El Paso was the second city to launch a Get Shift Done program, which originally was intended to last about three months. It was started in March 2020 by entrepreneurs Patrick Brandt, of Shiftsmart, and Anurag Jain, AccessHealthCare chairman. The unique program has grown to 12 regions and 110 nonprofits, with more than 28,000 workers who have put in more than 1,000,000 hours and served more than 60,000,000 meals.

Last month, the Get Shift Done was named the No. 1 not-for-profit on Fast Company magazine’s annual list of innovative companies for 2021. It was No. 28 on the magazine’s 2021 World’s Top 50 Most Innovative Companies list.