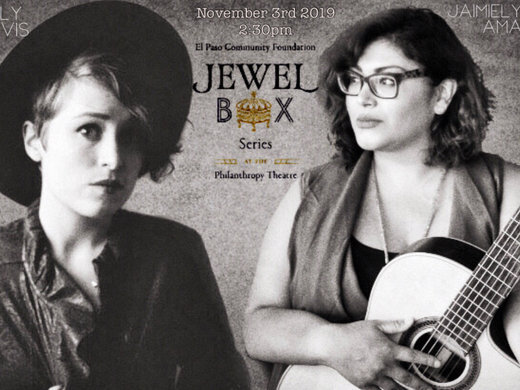 The concert, which features solo sets from singer-songwriters Emily Davis and Jaimielynn Amato, is at 2:30 p.m. Sunday, November 3 in the Philanthropy Theatre, located on the second floor (above the box office) of the Plaza Theatre Performing Arts Centre.

Singer, guitarist and songwriter Emily Davis’ punk-folk has always had an edge. She has built a solid reputation locally and around the country with her fiery performances and soulful solo albums No Real Destination, Dark Matter and The Worst Kind of Curse. That edge got sharper when she formed Emily Davis and the Murder Police, a rock quartet whose debut album Same Old World was released in 2018. The group performed at the El Paso Community Foundation’s 2019 Plaza Classic Film Festival, this month’s El Paso Forever benefit with Cold War Kids, and recently completed a national tour in support of Bad Religion.

Jaimielynn Amato, dubbed “The Songbird of El Paso,” is a versatile voice student (and ace whistler) from the University of Texas at El Paso whose multi-octave soprano can glide effortlessly from glassy to husky in a nanosecond. Her musical range is equally impressive — opera, choral, folk, pop, and jazz. A fixture at Anson 11 and other establishments, Jaimielynn returns to the Jewel Box Series, where she gave her first concert of original music last season. She also performed at this year’s Plaza Classic Film Festival.