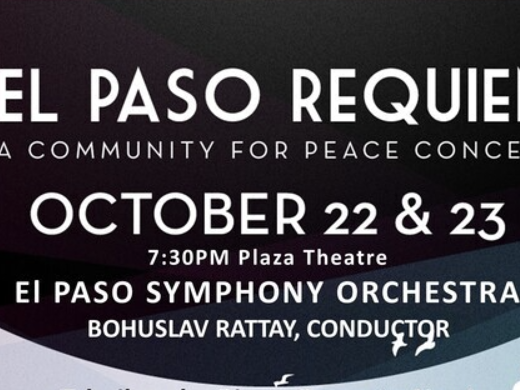 Communities for Peace will present the world premiere of El Paso Requiem during the El Paso Symphony Orchestra’s concerts at 7:30 pm Friday, Oct. 22 and Saturday, Oct. 23 in the Plaza Theatre.

The piece by Cuban-American composer Jorge Martin is 23-minutes long, with one minute for each of the 23 victims of the August 3, 2019 mass shooting at the Cielo Vista Walmart in El Paso. It was commissioned by Communities for Peace, an historic collaboration of EPSO, the UTEP Department of Music, El Paso Pro-Musica and El Paso Opera, with support from the El Paso Community Foundation.

The collaboration began working with the Community Foundation in 2019 to commission a work to honor the victims. It was announced on February 26, 2020 and was to be performed in September of last year, but was postponed because of the COVID-19 pandemic.

Of his requiem, Martin said: “This is closer to the Verdi (requiem). The work is about catharsis.” He felt that the tragedy of August 3, 2019 needed to be met with reverence. “Grief is a very personal thing and everyone has their own because grief is love. And everyone’s love is unique,” he added.

We are so excited that the requiem will finally be played live this weekend, and we hope you all can attend.

For tickets, head to epso.org.