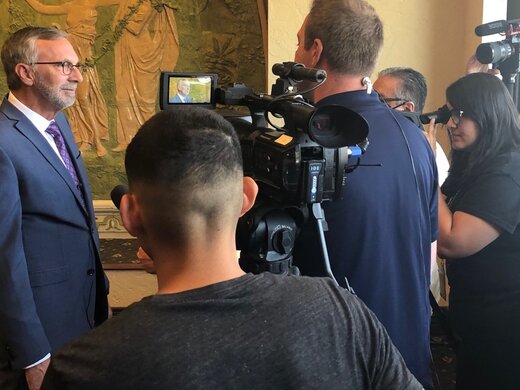 In a news conference earlier today, the El Paso Children’s Museum and Science Center announced Barry A. Van Deman as its new Executive Director. Mr. Van Deman comes to El Paso from Durham, NC, where he recently retired after 16 years as president and CEO of its Museum of Life and Science.

Mr. Van Deman brings nearly 40 years of experience in nonprofits and education to El Paso. He has held leadership positions at the National Science Foundation, the Orlando Science Center, and Chicago’s International Museum of Surgical Science and Museum of Science and Industry.

“This is a perfect time to have Barry come on board. He will get to be a part of the funding and construction milestones as well as steering the building of the brand,” said Stephanie Otero, the Museum’s Interim Director and Vice President of Operations at the El Paso Community Foundation.

The El Paso Children’s Museum and Science Center conducted a national search to select Mr. Van Deman. “His hands-on experience allows him to develop educational programs, hire staff, and put a strong operations plan in place in a very short time,” said Eric Pearson, President and CEO of the El Paso Community Foundation, and Vice Chair of the Museum, noting that the venue is likely to open in less than 18 months. “Barry showed a real affinity for learning and adapting what he knows into what he may learn about our unique, international community.”

Mr. Van Deman is an award-winning educator and administrator with extensive experience in public schools and at the university level. He has authored textbooks and has been published in several journals. He was affiliated with numerous organizations in the science and education fields, including the Association of Children’s Museums, Association of Science and Technology Centers, the Association of Zoos and Aquariums, the Center for the Advancement of Informal Science Education, and the Institute for Learning Innovation. Mr. Van Deman holds a master’s in education from Northern Illinois University.