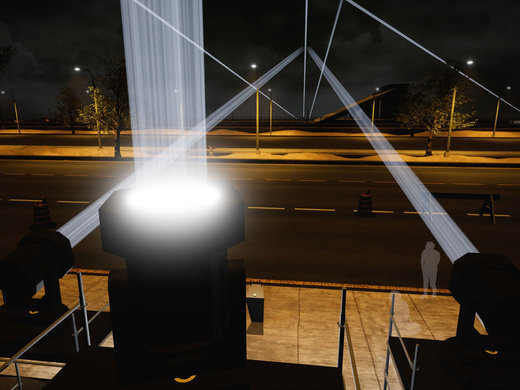 Border Tuner</i> is like nothing you’ve ever seen before.

The El Paso Community Foundation is proud to be a partner in presenting this major new public artwork by internationally renowned visual artist Rafael Lozano-Hemmer.

Border Tuner will light up the night skies over El Paso and Ciudad Juárez at 6 p.m. daily through November 24 at Bowie High School in El Paso and the north side of Parque Chamizal in Juarez.

The installation features six light statues — three on either side of the border — beaming 18 powerful searchlights that can be manipulated by viewers. When the beams touch, they open, or tune in, a communication channel between viewers on the El Paso and Juarez sides.

In addition to the conversations it inspires, the installation will include performances by residents of both sides of the border — poets, dance groups, bands and more. Lectures and other events are planned for each day.

Lozano-Hemmer’s work will shine a light on unity between the two sister cities and the people of both the United States and México.

Border Tuner represents a binational collaboration between a wide range of individuals and organizations from both cities.

To learn more about the project please visit bordertuner.net.

The project has been funded in part by the Mellon Foundation, Arte Abierto, Bloomberg Philanthropies, VIA Art Fund, Novamex, Antimodular Studios and Grupo S-Mart.

It is presented in collaboration with a diverse group of local partners, including the El Paso Community Foundation, Rubin Center for the Visual Arts at UTEP, Fundación Comunitaria de la Frontera Norte, the City of El Paso Museums and Cultural Affairs Department, Ciudad Juarez Municipal Government, the Undersecretary of Culture of the State of Chihuahua, Bowie High School and the El Paso Independent School District, Azul Arena, and Transtelco.

Get in to the Spirit of Giving